How to Use a Thermador Convection Oven

How Does the Convection oven Work? 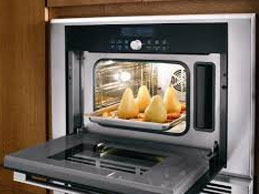 The fans that are built into the Thermador convection oven will actually blow on the cooking food to heat it up not only from the heat of the oven but the heat from the fans as well.  A conventional oven will only have the heat beaming down from the coils so that the dish will slowly heat up as it gets to be a very high temperature.  An example could be air drying your hair out on the porch on a hot day (conventional oven, using hot temperatures to achieve goal) versus using a hair dryer to dry your hair (convectional oven, using hot temperatures plus a fan to achieve goal).  Your hair will more than likely dry faster and more efficiently (look better) with the hair dryer than if you just sat outside in the heat waiting.

It is thought that while the fans allow the food in a convection oven to cook at a faster rate, the food also gets cooked more thoroughly, giving it better consistency and taste.  In a conventional oven, where it will take higher temperatures and longer times to cook, sometimes your meals may come out dryer than what you would like.  Because of the advanced cooking inside the Thermador convection oven, your meals should cook shorter allowing the water and juices to stay locked in, resulting in a more flavorful meal.

It is suggested to stay close to your Thermador convection oven so that you are able to start smelling your baked goods.  Because of the fan distributing heat to your food, it will cook faster so you will want to check your food when you smell it to be sure it is not overcooking.  You will not want to continuously open the convection oven, so be sure to have a cooking thermometer on hand so that you can be sure the temperature in the middle of the dish reaches 165 degrees Fahrenheit.